Police Care UK and the Police Treatment Centres have today announced a strategic partnership that establishes a centre of excellence to better care for those who suffer psychological harm because of their policing role.

Police Care UK and the Police Treatment Centres have today announced a strategic partnership that establishes a centre of excellence to better care for those who suffer psychological harm because of their policing role.

Recent research published by Police Care UK has revealed that more than 90% of police officers will be exposed to multiple traumatic incidents during their career, and that 1in5 serving police personnel are currently living with symptoms of PTSD. This is further supported by the recent revelations that a police officer dies by suicide every two weeks and by research published by the Police Federation of England and Wales showing that more than 79% of serving police have experienced stress and anxiety in the last twelve months.

The new Centre of Excellence will be built at the Police Treatment Centres St Andrews site in Harrogate and will focus its efforts on building RESILIENCE to better support the wellbeing of officers and staff and providing ACCESS TO TREATMENT that reflects the needs of policing, including Post Traumatic Stress. This will be a national specialist facility to support all regions of the UK.

The initiative is a collaboration between the two charities, with funding from both organisations and a grant from the LIBOR fund. Building works are expected to commence early 2020 with the charities aiming to pilot the new treatment service by early 2021.

Police Care UK Chief Executive Gill Scott-Moore said, “Policing has always been a dangerous career, but the psychological harm from repeated trauma exposure has only recently begun to be understood, thanks to research like that funded by Police Care UK. This new Centre of Excellence is the first step towards better access to psychological treatment for serving and veteran police officers and staff who need it – something we’ve been strongly advocating for.” 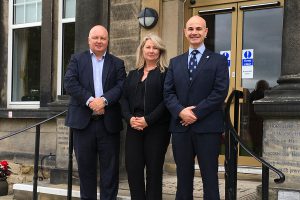 90% of police personnel will be exposed to repeated trauma during their career, and the lack of specialist treatment is compounding the impact on health and wellbeing. This has a cumulative effect on their overall health and wellbeing, including increased risk of cardiovascular disease, gastrointestinal issues, fatigue, anxiety, and immune disorders such as IBS.

In addition to enabling access to new and much needed services, the project will also see an expansion to the existing Psychological Wellbeing Programme at the Police Treatment Centres. 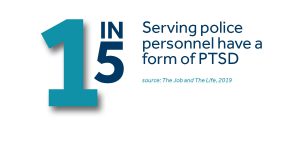 Police Treatment Centres Chief Executive Patrick Cairns said, “Charities like ours have seen a near 25% increase in demand for our services in treating mental health and wellbeing issues the last year alone. Policing is, quite literally, breaking our Police Officers and staff, and much of the treatment and support needed to recover is being delivered by police charities such as the Police Treatment Centres.”

Gill Scott-Moore said, “Police Care UK is committed to reducing the impact of harm on police and families. Partnering with the Police Treatment Centres to develop a Centre of Excellence allows us to combine our knowledge, expertise, and resources to better support those we care for. Together, we can better enable serving and veteran police officers and staff, and volunteers to recover and rebuild their lives following psychological harm.

In light of the recent outbreak of Covid-19 and Government advice, we have decided to reschedule and postpone some of our events. Please see below more detail on the specific events, however all attendees who are booked on for events and training will be contacted directly. We fully appreciate your cooperation and understanding with these […]

Police Care UK members can now benefit from free exclusive access to over a thousand perks, discounts, and freebies from big-name brands and local businesses through our new partnership with Perkjam. The Police Care UK perks platform, powered by PerkJam, covers all aspects of life from entertainment, technology, travel, automotive and more.  All serving and […]